Over the next 30 days, The Birmingham Buff will feature 30 remarkable women who have made their mark on Birmingham’s history.

If you’re a bibliophile, then this story is probably one you’ve daydreamed about: throwing caution to the wind to open your own bookstore. 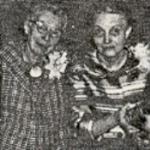 For sisters Anna Linton Praytor (1914-1989) and Frances Virginia Praytor (1899-1974), this dream became their reality when they purchased Smith and Hardwick Bookstore in the early 1950s. According to a profile featured on the Alabama Hall of Fame website (to which both sisters were inducted in 1991), Virginia, as she preferred to be called, served as the store’s president and Anna as secretary-treasurer.

Virginia went back to school (to Vanderbilt) in her 40s to complete her master’s degree. Her thesis contributed to Clyde Pharr’s seminal translation of the Theodosian Code, a set of laws under the Roman Empire.

If they had a motto, I’m sure it was “Age ain’t nothing but a number,” or maybe not. But we all can agree we can learn to give caution the old heave-ho to follow our dreams, just as the sisters had.

2 thoughts on “30 Women You Should Know”