On February 24, 1999, Virginia Foster Durr, a civil rights advocate, died in Carlisle, Pa. Durr was born in Birmingham on August 6, 1903 to a Presbyterian minister, Sterling Foster, and his wife Anne. Various accounts state Durr was raised as a typical Southern girl, one who accepted racial segregation. But as a sophomore at Wellesley College, Durr began to question that aspect of her upbringing. The school’s dining hall had “rotating tables” where the coeds were required to dine with random groups of students, including blacks. At first Durr balked, but was told by school officials she could either comply or leave. Durr chose to stay (until she had to leave due to financial reasons). There she began to step outside of her “magic circle,” as the quote below (taken from her autobiography) explains.

“She [the Southern white woman] could be the actress, playing out the stereotype of the Southern belle. Gracious to ‘the colored help,’ flirtatious to her powerful father-in-law, and offering a sweet, winning smile to the world. In short, going with the wind. If she had a spark of independence or worse, creativity, she could go crazy—on the dark, shadowy street traveled by more than one Southern belle. Or she could be the rebel. She could step outside the magic circle, abandon privilege, and challenge this way of life. Ostracism, bruised of all sorts, and defamation would be her lot. Her reward would be a truly examined life. And a world she would otherwise never have known.”

She married Clifford Durr, a lawyer, in 1926. In 1933, they moved to Washington, D.C. where her husband served in the Hoover administration, and then later Franklin Roosevelt’s. They eventually had five children.

While in D.C., Virginia Durr worked hard to eliminate the poll tax, a tax Southern blacks had to pay before being allowed to vote. The Durrs moved to Montgomery in the early 1950s and soon became involved with the civil rights struggle there. She and her husband helped bail Rosa Parks out of jail after she refused to give up her bus seat to a white man. Throughout the civil rights movement, the Durrs provided invaluable support.

After her husband died in 1975, Durr continued to work for progressive causes, including the eradication of poverty.  At the time of her death, President Bill Clinton stated, ”A white woman, born to privilege in the Deep South, Mrs. Durr refused to turn a blind eye to racism and intolerance in our society. Her courage and steely conviction in the earliest days of the civil rights movement helped to change this nation forever.”

On April 6, 1917, Congress declared war. Before this great war would end in 1918, the U.S. acquired an army of 4 million men (2 million had been sent to France).  Within these numbers were brave men from our city. Over the next few days, we will highlight some Gold Star soldiers who lost their life while in uniform. (The practice started with WWI with gold stars being awarded to the fallen soldiers’ mothers.)

ORVILLE M. COSTON
Lieutenant Orville Coston, born March 19, 1893 in Lincoln County, Tennessee, was killed in action October 1918 in the Argonne Forest of France. Below is text from a newspaper notice announcing his death.

Lieut. Orville Menees Coston, of Birmingham, one of the most popular boys who ever attended the University of Alabama, has made the supreme sacrifice. He was killed while leading his men in an attack on a machine gun nest in the [Argonne Forest]. Lieut. Coston was the sort of man that demanded respect wherever he went and no risk not too great for others was too great for him.

He was the son of Dr. R. H. Coston of Birmingham, and attended the University of Alabama for five years, graduating in Academic and had completed one year of his law course when the war broke out. He was among the first to volunteer and went to the first officers’ training camp at Camp Gordon where he was commissioned a second lieutenant in the Infantry. He sailed for France last April and had been in the thick of several fights.

In a letter received from Lieut. Coston last month he said that he was so glad that the fight was nearly over and that he thought he would soon be back in the States with his loved ones.

On April 6, 1917, Congress declared war. Before the war would end in 1918, the U.S. acquired an army of 4 million men (2 million had been sent to France).  Within these numbers were brave men from our city. Over the next few days, we will highlight some Gold Star soldiers who lost their life while in uniform. (Gold stars were awarded to the mothers.)

This information was taken from the World War I Gold Star Database found on the Alabama Department of Archives and History’s website.  The information, which varies in length, was given by a family member of the deceased in preparation of a book that was never published. The site cautions that the information has not been verified “including spelling of names.” The text below was taken verbatim from the “Biographical Memoranda” the family member completed. (It may have been edited for grammar.)

LEON RAGSDALE MCGAVOCK
This biography was prepared by the soldier’s mother, Mrs. W.R. McGavock who lived at 1021 St. Charles Street, South in Birmingham. 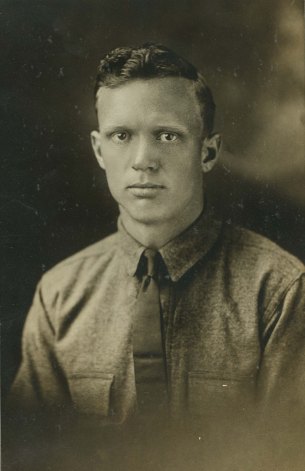 “The McGavock family is a very old one, and one prominently identified with military and political affairs of the country for nearly 200 years. James McGavock, Sr., the great-great-great grandfather to Sergeant Leon Ragsdale McGavock, was the first of his family to come near Glenarm. In 1754 or 1755 he landed in Philadelphia, later settling in what is now Rockbridge, Virginia, and settled at Fort Chisell, Virginia. Here he filled with credit high offices, both in civic and church affairs, and also served as Magistrate and agent responsible responsible for disposal of provisions for the Continental Army. Mr. McGavock came of that remarkable people, the Scotch-Irish, who have done so much for the liberties of this country, and for education generally, and the dissemination of Presbyterian principles, especially in Pennsylvania, Virginia, North Carolina, and Tennessee.

Hugh McGavock, the son of James Sr. and Mary Cloyd McGavock, was the great-great grandfather of Sergeant Leon Ragsdale McGavock. He married a Miss Nancy Kent of Montgomery County, Virginia, in March 1785. He was in a volunteer company under Colonel Joseph Crockett in the Revolutionary war to repel an invasion by the Indians on the Ohio frontier.

Robert McGavock, son of Hugh and Nancy Kent McGavock, was the great grandfather of Leon Ragsdale McGavock. He was born October 20, 1794 at Max-Meadow, Wythe County, Virginia. He married Anne Hickman, daughter of Colonel Thomas Hickman, March 9, 1819, at Howard County, Missouri, where he engaged in the practice of law for a number of years, having graduated at Washington College, now Washington and Lee University.

It is not surprising to find an enviable Army record on file for Leon Ragsdale McGavock, for his ancestors on both sides had set the example for him. His grandfather, Robert Ragsdale, fought all through the Civil War, together with three brothers and three brothers-in-law.

On February 8, 1914, Leon Ragsdale McGavock enlisted in Battery E, 4th Field Artillery, in which company he stayed for three years at Texas City and Brownsville, Texas. Leon R. McGavock had just gotten out of college and had not entered into any profession or occupation before making his enlistment in February 1914.

Beginning September 17, 1917, he was stationed at Camp Mead, Maryland, in the 312th Machine Gun Batallion, 79th Division, where he was engaged as an instructor for about nine months. He sailed for France July 8, 1918. Leon Ragsdale McGavock fought in the Meuse-Argonne battle from September 13, 1918, until October 6th, 1918. While engaged in battle, he was promoted to the rank of sergeant. On the victory medal of Leon Ragsdale McGavock are two bars inscribed as follows: Meuse-Argonne and Defensive Sector.