In 1881, Colonel Enoch Ensley, a wealthy businessman from Memphis, arrived in Birmingham. He was in town to conduct business with Henry DeBardeleben, who, because of his tuberculosis, wanted to move out west. According to the Encyclopedia of Alabama:

“Ensley reportedly wrote a $600,000 check on the spot and shortly thereafter bought a majority interest in both the Alice Furnace Company and the Linn Iron Works, although some sources say the payments were made over a six-year period. Combining these entities in 1884, he created the Pratt Coal and Iron Company. Ensley then began to acquire land, which resulted in his owning a substantial amount of real estate in the rapidly growing Birmingham area. Ensley and his mining engineer, Llewellyn Johns, increased output in the Pratt mines by digging additional mine shafts. Ensley also pressed the Alice furnaces, known as “Little Alice” and “Big Alice,” into competition with each other as well as with the Sloss furnace. This approach resulted in “Big Alice” producing 150 tons of pig iron in a single day in 1886, which set a record for southern blast furnaces.”

In 1886, complicated business deals led to the Tennessee, Coal, Iron and Railroad Company taking ownership of Ensley’s mines. Ensley would later become president of TCI before the end of the year. 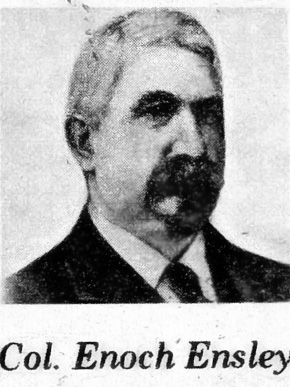 Ensley envisioned a model industrial city on land known as Opossum Valley. (A geological survey report described Opossum Valley as extending “from west of Salem Hills northward and [being] continuous with Murphrees Valley north of Village Springs.”) Ensley named the town, which was founded in 1887, after himself. It was incorporated in 1889. Ensley died in 1891. Ensley did not come into its own until the turn of the century.

“[By 1908] more than 30 miles of streets and sidewalks had been paved; water, light, and storm and sanitary sewer systems extended; and a city hall, schools, and a public library built, giving Ensley more public improvements than any other municipality in the area other than Birmingham itself.”

Ensley merged with the city of Birmingham in 1909.