30 Things I Didn’t Know about Birmingham

I am sharing interesting tidbits about Birmingham and some of her people that I’ve recently learned. These items may be new to you as well or just a reminder.

Birmingham is filled with older, stately homes that seemed to have gotten finer with time. And many neighborhoods, from Avondale to Norwood, are experiencing a renaissance of sorts, where long-neglected structures with good bones are being handsomely restored. But only recently have I learned of a masterpiece of a house, a real beauty, that was eventually demolished to make way for the Elton B. Stephens Expressway in the early 1960s.

Located at 1401 Beech Street (now 21st Way South),  architect Joseph C.Turner designed and built the house to serve as a showpiece, as a testament to his skills. It has been described as beaux-arts style and Greek revival; perhaps, Turner designed the house to be a bit of both. According to bhamwiki.com, the 20-room mansion featured “a circular entrance hall with a marble fountain at the center. A circular stair gave access to the second-floor bedrooms while the top of the rotunda had a stained-glass dome which was illuminated at night. Each room, including the bedrooms, had a fireplace with a unique, hand-carved mantelpiece and a crystal chandelier.”

Unfortunately, Turner and his family never got the chance to move in as his wife died from pneumonia after refusing treatment because of her faith in Christian Science. The architect sold the house to a prominent businessman in town, Richard Massey, founder and owner of Massey Business College.  Massey and his wife called the house Turner and hired an Italian gardener to create the city’s first Italian garden. The place was reknown throughout the city and the South.  The Masseys even hosted President Taft during his visit to the city 105 years ago today. 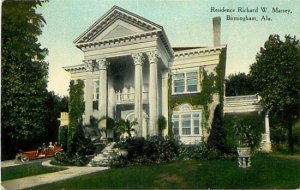 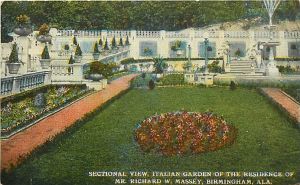